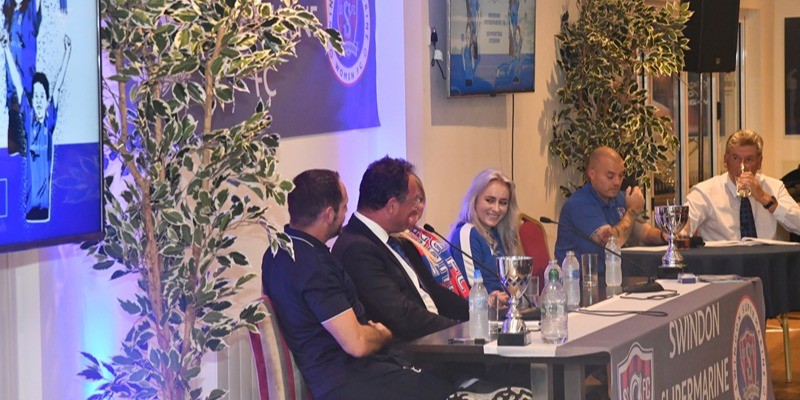 I was honoured to attend The 2019 Supermarine Supporters Evening on Friday 17th October. This was an extremely popular attracting over 100 fans, players and sponsors to the Webbswood bar and community suite.

Drinks and light refreshments were served by the fantastic volunteers to get everyone in the mood for the Q&A session.

The session began with a short film entitled “Local Pride” by Leigh Moore (son of Supermarine’s President Steve Moore) which looked at a typical matchday through the eyes of fans, volunteers and the club officials including Chairman Jez Webb. The film portrayed what the club means to the local community and fans of non-league football and we all agreed it was a great piece of filmmaking.

A panel session was then hosted by Steve Moore and Brian Davies - the club’s social media guru.

Jez Webb set out his vision for Supermarine over the next 5 years both on and off the pitch - plans include a new 300 seat undercover stand.

Lee Spalding the First Team Manager then answered questions about the squad and explained his plans to take the club to new heights - including keeping an eye on the new academy for up and coming talent.

Women’s team and Academy Manager Kerry Walklett talked about the academy and her plans to grow women’s football at Swindon Supermarine. This was echoed in discussions during the break where supporters agreed that the Supermarine’s inclusive family values create an atmosphere in where women’s football can develop and grow.

Cherie-Anne Baxter of Universal (one of the club’s primary sponsors) talked about why the company had decided to sponsor the club and how the partnership provides an opportunity to support the local community and help the business grow at the same time.

During the Q&A session at the end there was a lot of focus on growing Swindon Supermarine and the match day attendance and many suggestions were taken away by the club officials.

The volunteers who make the club so successful received a huge round of applause at the end of the evening and the meeting closed with everyone feeling very positive about the future of the club.